We are very pleased to welcome a special guest to Tuesday Serial. Doug Lance is the Editor-in-Chief of eFiction which has published pieces from several Tuesday Serial contributors including Aaron M. Wilson and Tonya Moore, among others.  He has built not only a successful magazine with a wide readership, but also a wonderful community of writers complete with forums for workshopping new pieces.  Please feel free to post your comments and questions, Doug will be happy to address them.  Welcome, Doug!

“Four Timeless Tips to Make Your Serial a Success”

Serial fiction is making a comeback. In the age before television and radio, serialized fiction in penny dreadful and pulp magazines was the hot ticket in entertainment. That’s how Dickens and Sir Arthur Conan Doyle built their fame. When the pulps died out in the 1950s, so too did serials. And there they remained for decades. Now, the internet is bringing serials back. Thanks to free distribution over the internet and zero-risk for authors to start publishing a serial, we may be coming upon a new age in the history of serialized fiction.

I’ve read serials from every era—from one of the first, The Moonstone by Wilkie Collins, to Stephen King’s The Green Mile, and on to countless modern web serials. There are some commonalities that stand the test of time that seem to create a successful serial, not only financially in sales but also for recognition of the author. Here are the tips that I deem the most important:

1)      Episodes – Have you ever introduced someone to a new TV show? You probably have. What did you tell them to get interested? A good serial needs only a few sentences of introduction for someone to be able to jump right in. That is the key to growing a following. If there are too many unexplained happenings in a story, then a new reader will quickly become confused and skip to a different story that they can get into. Serial fiction must be told in episodes where each section can stand alone. It is tricky to write in this fashion without coming across as too descriptive to your biggest fans, but it is definitely possible.

2)      Big conflict – to sustain a story over months and months. There must be a powerful conflict driving the story. Collins had the mysterious theft a precious gem in the Moonstone, Dickens’ conflict was driven by internal struggle and relationships. No matter how you slice it, the conflict in a serial must be absolutely gripping. Readers can’t read ahead to find out what happens. They must wait until the next issue to find out what happens. If the conflict isn’t full stakes, then readers will lose interest.

3)      A strong lead – Sherlock Holmes. Just the mention of his name forces you to imagine this character in your mind: his brown clothing, patterned hat, and big smoking pipe. He is the quintessential detective. Doyle created Holmes as the leading character of his serials. Holmes is unique and quirky, yet he still feels real when we read about him. When a story is being serialized, many characters tend to come and go, but the main character always remains. It is crucial for the lead to be a fully realized and complete person, as well as an interesting character.

4)      Relevant context – What is the point of running a story serially if not to address timely issues? There are better ways to build an audience. Context is important for serial fiction. By context I mean, the wider world in which the story exists. Commentary on social issues in a fictional narrative has created success for authors in the past. The Moonstone addressed British colonialism. Sherlock Holmes was about social issues of the proletariat in old England. This is another method to sustain interest in readers while the serial is on hiatus between episodes.

It’s time for serial fiction to experience a renaissance. Hopefully, you’ll take my ideas, store them somewhere in your subconscious, and get to writing that world-changing serial.

Doug Lance is the Editor-in-Chief and Founder of eFiction Magazine (currently accepting serial fiction submissions). He is a Michigander living in Chicago, graduate of Creative Writing from WMU where he studied under Jaimy Gordon (author of Lord of Misrule, National Book Award Winner 2010) and Thisbe Nissen. He works with authors in all stages of their careers as an editor and marketing/publishing consultant. Find him on Twitter @DougLance.

“Tips For Believing In Your Serial” by Emily Ann Imes 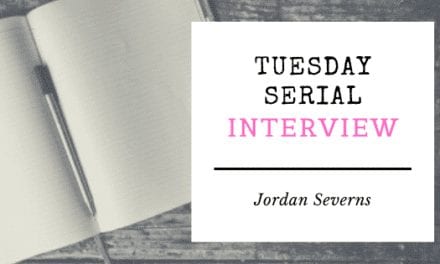