We are pleased to welcome Tuesday Serial contributor John Prindle to the Tuesday Serial site today for the second installment in our guest post series. We will be featuring guest posts every other week from now through December 20. You can view previous posts in the series here. Welcome, John!

The Art of Disposal, my dark-comedy mafia thriller at JukePopSerials, is my first go at the serial fiction format. It started off as a short story (which is why the first chapter feels a little “too complete”). Once I realized I would have to flesh it out and grow it into a novel-length work, the pressure of a deadline kept me on track. I’ve written other lengthy pieces of prose, but always on my own schedule, or under self-imposed deadlines. Serialized fiction was a new thing for me. Sure, I’d heard of it. We all know how Charles Dickens released most of his novels one installment at a time in the most popular magazines of the day. Hey, if it’s good enough for Dickens, it’s good enough for me.

When I first started posting at JukePopSerials, I opted for writing a new installment once a month. I quickly realized that this was too infrequent. To hook a reader, you need to think like a drug dealer. Give them a juicy story that they’ll love from the first hit, and then give them doses of the same high-quality product at regular intervals to keep them coming back for more. So I went to bi-monthly for a while. Still, that didn’t feel quite right. After a few months at JukePop, I settled on a weekly posting schedule and found it to be the most comfortable and, more importantly, the most productive. Just like your favorite television show, there seems to be a kind of perfect symmetry to the once a week installment.

So what’s so great about a deadline? A funny thing happens when you put yourself into the pressure cooker. You get the job done. No slacking off. When you’re writing for other people, even if it’s just a mere handful, you feel a kind of obligation to keep the story going, and to make sure that the work is clean and precise.

When I’m writing a first draft in isolation, I can be more lax about it. But having a deadline, knowing that there are readers out there who are waiting for a new chapter every Friday, forces me to keep on going, to get to that finish line—and to make damn sure that it isn’t as disappointing as Season 8 of Dexter.

Every good writer loves to write. It’s more than just a job. They will set their own goals and get them accomplished, with or without an external deadline. The serial format, however, does so much more than simply help the writer put words on the page: the story itself seems to change; characters adapt and thrive and grow in unexpected ways because of the rigorous ecosystem. That’s the real beauty of the serial format.

Pressure can be your best friend. Now I see why so many of Charles Dickens’s novels started off as serials. Instead of churning out a mediocre first draft all alone, the publicized serial puts you in the director’s seat (so to speak) and causes you to edit more as you go, to polish your work as it’s developing. After all, someone is out there reading along! By the time your novel is finished, you’ll have a whole lot more than a rough first draft: you may even wind up with an almost finished manuscript that needs only minor tweaking and editing.

I encourage any writer out there who wants to try their hand at serial fiction to dive right in with only a bit of courage and a decent first chapter. Put your unfinished story into the pressure cooker and see if you can churn out a new chapter at regular intervals. It’s sort of like exercise. Your narrative muscles will surely grow.

John Prindle is a writer, photographer, illustrator, and musician who lives in the verdant city of Portland, Oregon. He believes strongly in the serial comma. He’s a coffee and tea snob, and he wears hipster glasses. When he’s not busy with one of his many fruitless artistic endeavors, he can be found watching The Rockford Files on Netflix. John’s serial “The Art of Disposal” can be found at JukePop Serials. 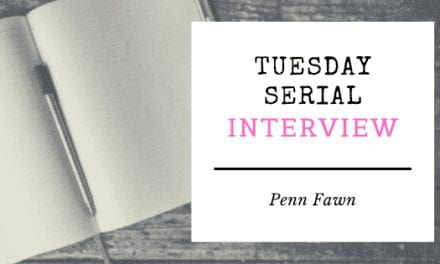